The unexpected outcome of the EU referendum has created a feeling of extreme uncertainty amongst businesses in Britain.

To help understand the immediate impact of Brexit we invited over 500 local authority economic development officers and business bankers to participate in a survey, and we reached out to small businesses through a social media campaign.

What we found is that 8 out of 10 Small Businesses think that the economic outlook is stormier now than before the referendum.

Equally striking is that the Economic Development officers and Business Bankers, who are in close contact to the small business market (and who have security of tenure), are more ambivalent about the new landscape; 75% think that Brexit is good news or are largely unconcerned by the result.

When asked to rank the potential effect of Brexit on small businesses, responders put the negative impact on Exporting as the number one concern with additional Regulations and lack of Access to Finance as further areas of greatest concerns.

Now let us turn our attention to see how all of this uncertainty has translated in the real economy by looking at fact based, empirical evidence.

Companies House data demonstrates that Brexit has sapped the Entrepreneurial spirit a month after the election.  Across Britain the number of company incorporations shrank by 11.9%.

This finding is mirrored when we look at the number of entrepreneurs who have opened a Business Bank Current Account (with a current account the small business can trade).  Using this measure of company formations, in the table above we see that new Starts Ups dropped by a massive 15.7% in July 2016 from a year earlier.  Indeed, the latest start-up numbers for July 2016 are the lowest July figures, since the series began in 2008.

There is now clear evidence both in our qualitative survey “Opportunities and Threats of Brexit on Small Businesses in the UK” and from quantitative data that during the first few weeks following the EU referendum Mark Carney’s prophetic words “all this uncertainty has contributed to a form of economic post-traumatic stress disorder amongst (small) businesses”[3] has indeed come true.

In the coming months, if we are to turn Brexit into something positive we need our small businesses to regain confidence, for banks to provide practical help to our aspiring SME wealth creators and for the Government to define and implement policies that support entrepreneurial endeavour.  We will keep the situation under review and provide an update in a few months’ time.

I would like to thank everybody who took part in our Brexit survey.  ‘Brand Britain’ is powerful, our goods and services are respected the world over.  It is essential that we are agile and that we take our British Spirit – of working together and making the best of a situation – to act pragmatically and turn Brexit into a success story.

[1] In July 2016 BankSearch conducted a survey entitled “Opportunities and Threats of Brexit on small businesses in the UK”.  Over 500 local authority economic development officers and business bankers were invited to participate in a survey, and we reached out to small businesses through a social media campaign. 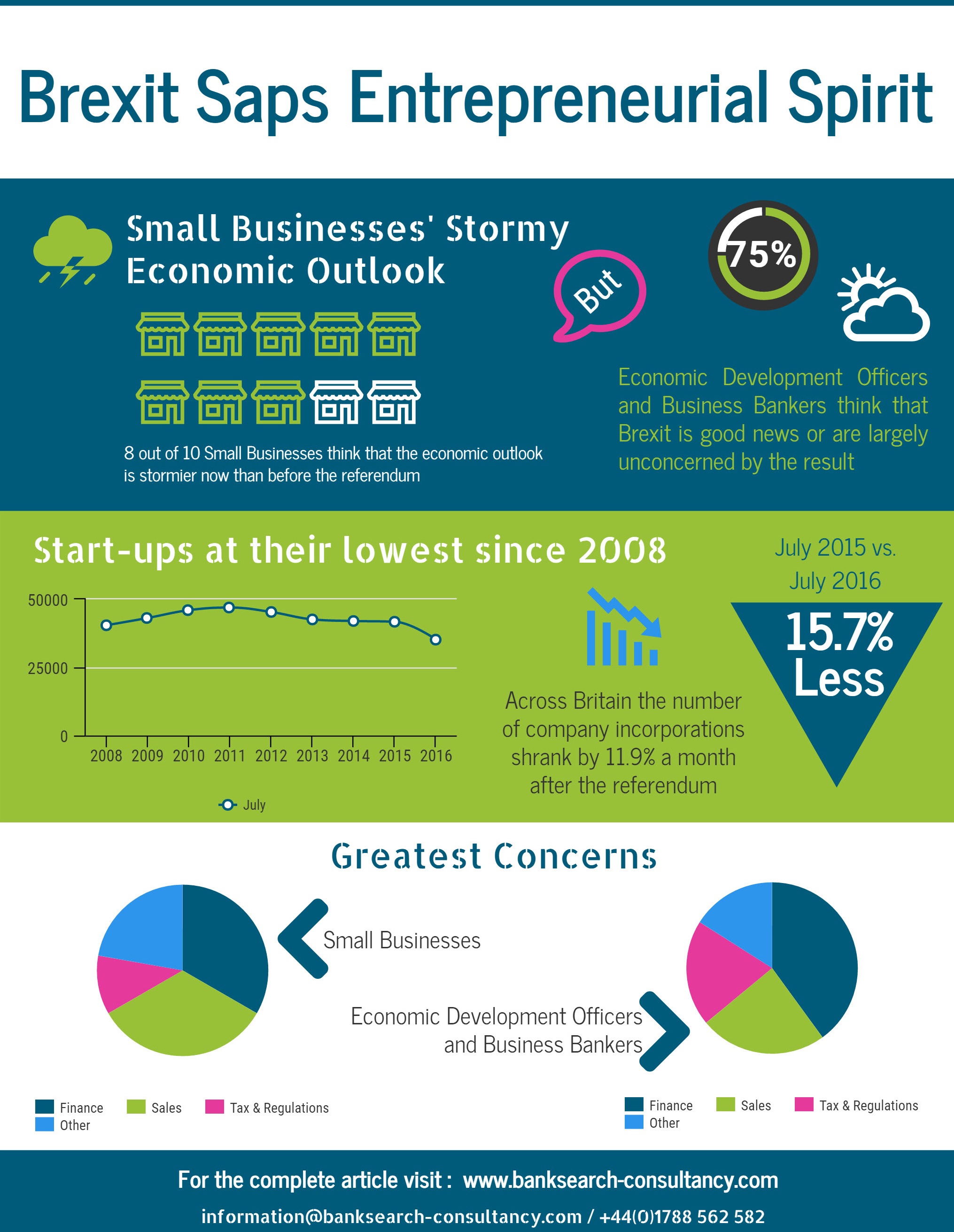